Gigs in Kinghorn this autumn

Posted on September 7, 2019 by Richard Pulsford | Leave a comment

We’re returning to the Harbour View in Kinghorn this autumn to put on comedy shows on 3 Sunday afternoons. So put the following dates into your diary: 29th September, 27th October and 24th November. Details of the line-ups will be posted later this month. Tickets will be £5.00 on the door.

We are organising 2 shows again this year as part of the second Outwith Festival in Dunfermline next month.

On Wednesday 4th September a podcast recording of an episode of It Just So Happened will take place in front of a live audience at The Andrew Carnegie Birthplace Museum. The show starts at 7pm and features guest panellists Vladimir McTavish, Susan Morrison, Bruce Fummey and Daniel Downie.

This history and comedy show will include routines on events and people from 4th September in history, and a dive into some of the history of Dunfermline. The show is hosted by Richard Pulsford. Tickets are £5.00 and available online and from the festival.

On Thursday 5th September there will be another showcase show of Fife acts, called 5 Fifers for a Fiver. This will be back at the British Legion on New Row, starting at 7pm. Tickets are, unsurprisingly, £5.00, online and from the festival.

We are putting on the comedy show for the annual Aberdour Festival, which this year falls on Monday 29th July.

It’s a fine line-up with Australian Ro Campbell as the headliner and seasoned compere Rick Molland as MC.

Other acts include rising stars of the Scottish comedy circuit: Krystal Evans and Connor Burns, and Burntislander Stuart McPherson.

The event is at The Woodside Hotel and starts at 19:30.

Tickets can be bought via here: Aberdour Festival

The regular last Sunday of the month comedy show in Kinghorn this month will be a special Edinburgh Festival Fringe preview. Richard Pulsford and Ross Leslie will each perform about 45 minutes of material which is to form the basis of their Edinburgh shows this coming August – so you’ll get a sneak preview of what lies in store! The show will be at the usual start time of 15:30 and tickets will be £5.00 on the door. See you there on Sunday 26th May.

Mirth of Forth celebrates its 9th anniversary

It’s 9 years this weekend since Mirth of Forth Productions put on their first regular comedy event. That event was at The Inchview Hotel in Burntisland (since closed!) on Saturday 24th April 2010, a baking hot spring evening.

It’s always interesting to follow the careers of acts who have appeared at small local gigs. At that inaugural event, the headliner was Gus Tawse, Richard Pulsford was MC, Tony Jameson opened, and Jason Murphy and Stuart Mitchell were the support acts. So some acts have long since retired from performing comedy, while others have gone on to become established acts.

Fittingly there is another comedy event today, just up the road in Kinghorn. Today’s event at the café above The Harbour View will see another mix of acts, with some who have been performing since at least 2010 and others who are much newer faces. Nik Coppin will headline, Graham Mackie is the compere, and support comes from Megan Shandley, Joe McTernan and Kenny Sinclair.

So it’s a good time to raise a glass to some 9 eventful and successful years of comedy promotion in Fife and further afield! Look out for the acts at today’s comedy event, and put a note in the diary to see where their careers are at in April 2028!

After packed out events in February and March, our regular monthly comedy event at the café above The Harbour View in Kinghorn returns this Sunday (28th April).

With Stuart McPherson, Ross Leslie and guests, hosted by Shona Lawson, it promises to be a great opportunity to relax and have a laugh either with or without family members present!

We ran the comedy last night at a Curry and Comedy event for the Rotary Club of Buckhaven and Methil. The event was to raise funds for a defibrillator for Methilhill and they were pleased to announce at the end of the evening that the required funds had been raised, which was brilliant news. Well done to all of the acts who delivered the laughs: Graham Mackie, Jeannie Jones, Kenny Sinclair and Krystal Evans. 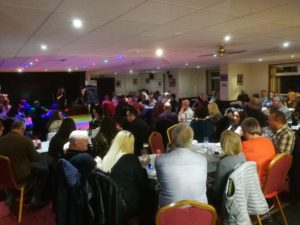 5 Fifers for a Fiver on 20th March

The Glasgow Comedy Festival show 5 Fifers for a Fiver will be at The Iron Horse on West Nile Street this Wednesday, 20th March, from 19:45.

The show will feature 2 Scottish Comedian of the Year finalists from last year i.e. Ross Leslie and Iain Hume, along with Declan McGuigan, Stuart McPherson and Rory Fell. Tickets are £5 on the door or can be bought in advance from SeeTickets with a booking fee: 5 Fifers tickets

We’re running the comedy section of a fundraising night for another local Rotary Club (Buckhaven & Methil) in Methilhill, Leven on Friday 22nd March. It’s a curry and comedy night and the line-up will be Graham Mackie, Jeannie Jones (compere), Kenny Sinclair, Krystal Evans and Richard Pulsford. Ticket enquiries should be directed to the Club.